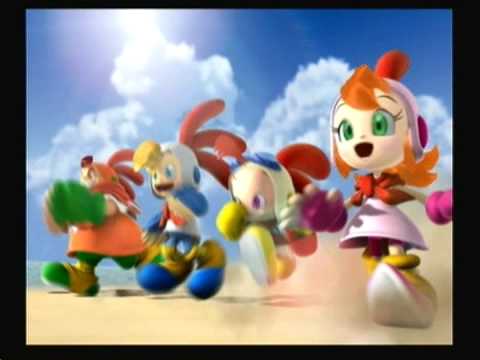 A forgotten Sonic team game on gamecube? Billy Hatcher and the Giant Egg is a video game for the Nintendo GameCube that was developed by Sonic Team. It was published by Sega on September 23, 2003 in the North America, and on October 31, 2003 in Europe. The game was released for Windows on March 31, 2006 in Europe.

The story begins with a fantasy world (called “Morning Land”) becoming overthrown by evil crows. Normally inhabited by happy chicken-people, Morning Land is shrouded in darkness and under the rule of the sinister Dark Raven.

After defending a helpless chick from two attacking crows in the human world, Billy and his friends are transported to Morning Land and each endowed with their own chicken suit, giving each the ability to move, use, and hatch giant eggs.

Billy, being informed by a “chicken god” that he needed to save the six chicken elders in order to save Morning Land, and to prevent the darkness from spreading to the human world. The crow of each elder would bring morning back to the area they governed, but each of the elders has been trapped in golden eggs which Billy must hatch in order to free them.

Author adminPosted on July 23, 2020
Download now: Nail fashion is flare like no other, and what better way to show off a new fashion than by getting an amazing...
Read More

Author adminPosted on July 14, 2020
Ciel is back playing more horror games, this time he tries Among The Sleep. Sorry my voice is a bit different this video, I...
Read More