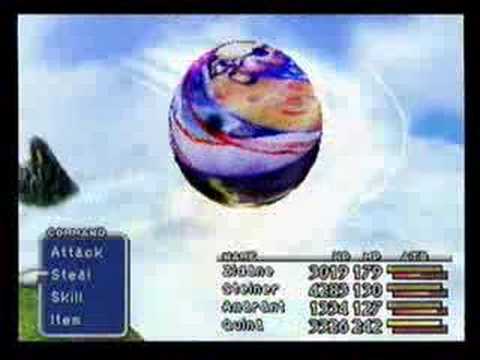 Ozma is my favorite boss in any Final Fantasy. The randomness of his attacks and the fact that sometimes Meteor just flat out kills you makes him a reasonably challenging boss despite having only 1/1000 of Yiazmat’s HP (assuming you’re at a reasonable level).

My perfect game was the first time I’ve gotten to fight Ozma legitimately in a while, so I took advantage of that and did it at a reasonably low level and without completing the friendly monster sidequest, and without using fixed damage.

This battle is all about abusing Ozma’s AI. Throwing the tent at the start of the battle heals Ozma (who cares?), but it also inflicts Darkness on him, which he sometimes wastes a turn curing, despite doing absolutely nothing. Having Steiner get hit by Lv 5 Death was intentional, since it’s on less turn he uses curse. Lv 4 Holy is Ozma’s most worthless attack (aside from Esuna) and can be guarded, so having someone get hit by that is a good idea too. Having Steiner and Quina equip Pumice Pieces may not have been the best idea, because it slightly increases the chances of seeing Meteor. Thanks to Auto-Potion and Auto-Regen, my party will always be fully healed after Flare Star. If he decides to hit me with Curse, it’s not a killer, it just slows me down some. Angel Snack takes care of it nicely. No Mercy, Shock, and Twister make up the majority of my damage, and Zidane is completely unable to damage him, so he goes on healing/ether duty after stealing the two missables from him. I have 2 additional recorded victories against him if people want to see them (one of them is 28 minutes long, but it was a damn fun battle).

All have Auto-Regen, Auto-Haste, Auto-Potion, Clear-headed. Quina has Millionaire, Loudmouth, MP+10%. Zidane has Master Thief and Bandit. Steiner and Amarant have HP+10%, HP+20%

I should note that Loudmouth is completely useless in this battle and would have been better replaced by Antibody.

Longplay of Billy Hatcher and the Giant Egg [HD]

Author adminPosted on July 18, 2020
Longplay of Billy Hatcher and the Giant Egg, played as the NTSC version on the GameCube. This game’s version was released on Sep. 23rd,...
Read More

Author adminPosted on July 14, 2020
​​​I just had to microwave this game controller! It was fun watching it bubble and start to grow on my plate. This would make...
Read More