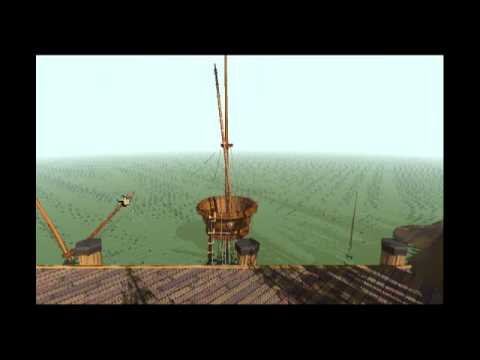 timing starts as soon as the book flashes onscreen and ends when i give the page to atrus. this is the 10th anniversary dvd edition on which certain cutscenes cannot be skipped.

i first decided to do this run in 2006, and the route i use is basically the same one i was test running back then. the reason i did this run in 2009 and not 2006, however, was due to lack of time and proper hardware to run the game – myst is so very cpu-intensive, after all.

to finish myst with the desirable ending, all you need to do is flip the eight marker switches on the island, flip the one near the beginning again, get the white page, and return it to atrus. so i counted the number of clicks it would take to finish using various routes, and i believe that this route takes the least amount of clicks as well as the least amount of mousing time. there are several other routes that take the same amount of clicks; this is just the one i like best.

my original goal was under 1 minute, but when i started doing serious attempts later, i quickly realized that wasn’t going to be possible. i’d say maybe a few more seconds could be shaved off if nothing new is discovered. i doubt i’m the fastest clicker in the world, but it is very difficult to be both quick and precise in this game.

therefore with this run i had to manage the balance between mousing speed and accuracy of the clicks. what you see is a technically perfect run – that is, no mistakes in clicking whatsoever – so the only improvements that can be made are to just mouse and click faster.

many slides aren’t very forgiving about where you can click to advance, especially when turning. so i was forced to slow down a bit when doing precise clicks such as flipping certain marker switches and entering the fireplace code. you’ll notice that when i just need to move straight, i go a lot faster and could generally get good precision by counting each click to myself.

you’ll also notice the long load and wait times, especially at the very beginning and during certain animations. i used the 10th anniversary dvd edition, on which these can’t be skipped. if i used a different version, such as the original, where some of these can be skipped, i might have been able to get the time a bit lower, though on other versions some of the slide transitions take more time, so it’s a trade-off.

finally, 131 clicks are required to hand atrus the last page, though i include two extra to skip his first cutscene and was actually clicking like mad during some parts.

hope you enjoy the run!

Author adminPosted on July 13, 2020
In this clip I tried to bring together all the amazing shots of space battles, without speech/actors itself, just pure action and CGI. This...
Read More

Author adminPosted on July 17, 2020
It’s really warm outside, a perfect day to go for a swim! Have fun singing and dancing along, and learn some basic swimming skills...
Read More

Longplay of Billy Hatcher and the Giant Egg

Author adminPosted on July 13, 2020
Longplay of Billy Hatcher and the Giant Egg, played on the PAL GameCube. This game’s version was released on Oct. 31st, 2003. Please give...
Read More

Author adminPosted on July 14, 2020
Help JoJo to collect all the farm animals that accidently had run away and make a real animal parade! If you like JoJo’s Circus...
Read More

Game
Author adminPosted on July 21, 2020
The gameplay of the draft I got last video! will I finally win it all? ●Twitter: ●Instagram: ●Merch: ●Second Channel ●My Snapchat: Jesserthelazer ●Facebook...
Read More